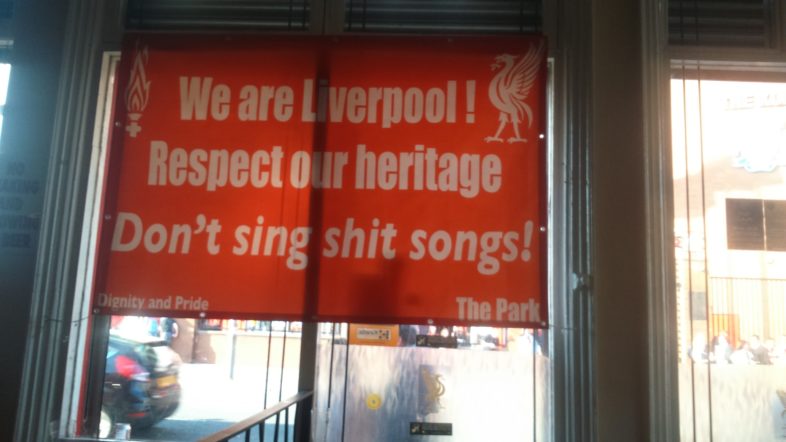 As the Champions League Final gets ever closer, more and more new Liverpool songs are emerging. Liverpool fans have always been well known for their original and wide variety of songs. Not only the fans though, the players have also contributed to the ever growing list of Liverpool songs. Did you know for instance that on this day 8th May 1988, Anfield Rap was released ahead of the FA Cup Final against Wimbledon. The song was written by Craig ‘Skippy’ Johnston and rapper Derek B. It reached number three in the charts. Well done Skippy but no disrespect, it’s not a song the fans can easily sing though.

If you haven’t heard it though, here it is…..

Recently we have seen a few new Liverpool songs emerge. Credit to those that have the creativity to ‘pen’ these songs. I know in some cases they are a re-write of fans of other clubs own versions. But even so. Some brilliant imagination is evident. The most recent offering is this….

Sung to the tune of the Beautiful South’s Rotterdam (Or Anywhere). No doubt this will catch on over the next couple of weeks or so.

Any mention of new Liverpool songs must include the incredibly popular “Allez, Allez, Allez”. Here is a short version I recorded from my seat in The Kop during the Roma home leg…..

And of course, Mo Salah was on fire that night. Here’s a video clip I also recorded on that night…….

There are quite a few Mo Salah songs going around. This seems to be the most popular though.

You will also no doubt be aware that there are many, many more Liverpool songs we could mention. Too many to mention here. Having said that, there couldn’t be a post about Liverpool songs without making reference to some of the classics.

We do have some real classic anthems don’t we. Top of the pile of course is You’ll Never Walk Alone”

So many fans and players alike (our players and opponents) say how special it is to hear Anfield belting out You’ll Never Walk Alone. Did you notice I said Anfield and not just The Kop. It seems that The Kop always gets the credit for great renditions of You’ll Never Walk Alone, but it is the whole ground that join in. So, credit due where credit is due.

Cliche’s aside, when the whole ground is singing this, it is at times like being part of a huge footballing family. I’ve witnessed so many excellent renditions of You’ll Never Walk Alone, again far too many to mention. But was the best rendition actually at Anfield?

Of course the singing of our anthem isn’t just limited to Anfield. Arguably, the best rendition was at, of all places, the Melbourne Cricket Ground in 2013. An incredible 95,000+ fans from the other side of the world!! That is so impressive. Listening to this never fails to give me goosebumps.

Have a listen to this rendition…..

What a great song. And another one to give you goosebumps. You can see two great versions on our home page HERE

The first one is the 2009 Commemorative version where musicians and players unite to pay tribute. The other is a brilliant version as the teams come out for the Champions League Semi Final against Chelsea on 1st May 2007. A great version of a really uplifting song. And one with such history attached to it. To find out more of the history of this classic Liverpool song see our home page HERE

You will all have heard it, or even sung it at matches. Again, an absolute classic. Mind you though, do you know the story behind it?

Poor Scouser Tommy was first heard on The Kop in the 60’s. There’s two distinct tunes in the song. Although they do blend well together. The first tune is ‘Red River Valley’ and the second part is a tune called ‘The Sash’.

Even though first heard in the 60’s there has been a significant modification to it in recent-ish years. Quite rightly it includes a tribute to great, iconic striker, Ian Rush. More specifically it relates to his contribution in an historic 1982 Merseyside derby win against our rivals Everton. Rush almost single-handedly destroyed Everton when he scored four goals in a 5-0 demolition. Poor Scouser Tommy has been modified to boast Rush’s four goals in the game in an almost mocking way towards our rivals across Stanley Park. This modified version usually ends with a closing verse of  ‘all you need is Rush’ to the tune of The Beatles classic ‘All you need is love’.

The Story Behind Poor Scouser Tommy

The story is about a young Scouser who is despatched off to fight in the war. Sadly, the youngster was shot down and with his last dying breath he utters the verse that begins with ‘oh I am a Liverpudlian’ as a defiant display of his love for Liverpool, the team he loved.

You can read more about the history of Poor Scouser Tommy in this touching poem HERE.

And you can hear the fans belting it out here…..

Others that maybe don’t as much airing as they should. Those that are lesser known such as ‘Those Were The Days My Friend’, “A Liverbird Upon My Chest” and ‘The Reds Are Coming Up The Hill Boys’. And one of my favourites, Every Other Saturday. You can listen to the fans singing this here……

We Won It 5 Times

As we are heading towards another European Cup Final we have to mention “We’ve Won It 5 Times”. After our historic success in istanbul in 2005, this magnificent achievement has been immortalised in song. I love this one….

Continuing the European theme, this one (The Liverpool way) is brilliant….

Not tempting fate, but I really hope we are singing this with great gusto and meaning on 26th May…..Oh Campione….

The list is huge. I have just given you a flavour of some of our classics. And what about the players songs? I have added a video above of some of the songs attributed to this season’s 2017/18 squad. But in days gone by, we have indeed come out with some brilliant tributes. The Torres ‘Bounce’ song, Luis Garcia – he drinks Sangria etc, several Steven Gerrard, the best midfield in the world and so on.

Scoring a goal of any description against Manchester United will almost certainly automatically earn you hero worship status. But when it is a 30 yard free-kick special in the top left hand corner!! John Arne Riise how did you score that goal?

And we can never forget Luis Suarez can we….

In days gone by I remember a balloon floating onto the perimeter around the pitch under the Main Stand and a little toddler running to collect it. He was only about 18 months old or 2 years of age and a healthy, chubby looking young lad. In an instant The Kop filled the ground with, “He’s fat, he’s round, his arse is on the ground…Sammy Lee, Sammy Lee!!”

Our managers have also enjoyed their own hero worship recognised by as a song, or songs. In particular, Rafa Benitez is correctly remembered for his outstanding achievements for us. Gerard Houllier and of course, Jurgen Klopp, have also had their names sung from the rafters.

The opposition do not escape the full force of The Kop either. One of the best ever for me was when Wayne Rooney, fresh from his new hair implants transition, ballooned a shot high into The Kop. Within seconds, he was greeted with….

Please note, none of the songs in this are about tragedies or deaths. For me there is no place in football for these type of chants or songs. 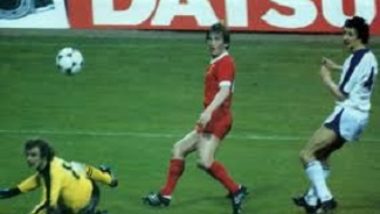 (15773)
£0.00 (as of July 7, 2022 00:36 GMT +00:00 - More infoProduct prices and availability are accurate as of the date/time indicated and are subject to change. Any price and availability information displayed on [relevant Amazon Site(s), as applicable] at the time of purchase will apply to the purchase of this product.)
24/7 LIVE STREAM: Manchester United content available all day, every day, with the live MUTV stream. VIDEO ON DEMAND: Catch up on your favourite Man Utd programmes anytime with our on demand content. MY LIST: Add shows and episodes to create your own... read more

(14906)
19% Off £1.99 £1.60 (as of July 7, 2022 00:36 GMT +00:00 - More infoProduct prices and availability are accurate as of the date/time indicated and are subject to change. Any price and availability information displayed on [relevant Amazon Site(s), as applicable] at the time of purchase will apply to the purchase of this product.)
Play with the traditional Waddingtons Number 1 playing cards Play your favourite card games in the classic red or blue coloured deck Every certified pack of Waddington's Number playing cards comes with a Winning Moves seal of authenticity - always lo... read more 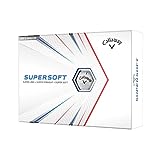 (12460)
13% Off £22.99 (£1.92 / count) £19.99 (£1.67 / count) (as of July 7, 2022 00:36 GMT +00:00 - More infoProduct prices and availability are accurate as of the date/time indicated and are subject to change. Any price and availability information displayed on [relevant Amazon Site(s), as applicable] at the time of purchase will apply to the purchase of this product.)
Supersoft has been one of the most popular golf balls for years, and we’ve combined incredible cover, core and flight technologies to make it even better. The new Hybrid Cover features an innovative PARALOID Impact Modifier made by DOW Chemical. This... read more