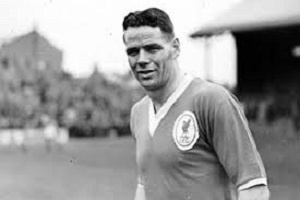 July 27, 2018 July, Liverpool Players Past And Present, On This Day No Comments

A very significant day in the history of Liverpool on this day 27th July 1938. This was the day we signed Billy Liddell from Lochgelly Violet for £200. No missing zeros. It was actually £200. On that day he walked into Anfield a 16 year old boy. By the time he left the club he was a Liverpool legend. A player to be forever immortalised for his time spent at Anfield.

Due to the Second World War it would be seven years after his signing for Billy Liddell to make his debut for Liverpool. His time in the army however served him well. The promising forward really filled out physically during this time. By the time he made his debut he was as strong as an ox.

He developed his footballing skills playing in wartime games. So, when he finally returned to Anfield he hit the ground running. Once he arrived he never looked back. Billy Liddell eventually played his first game for Liverpool and scored his first goal on New Years’ Day 1940, beating Crewe 7-3. Not classed as an official game in the sense it was played during wartime.

Liverpool’s future marquee star man played his first official game for the club in the FA Cup against Chester at Anfield on 5 January 1946. Liddell scored once in a 2-0 win.

Initially he was used as a left winger. But when he was given the Liverpool captaincy and his role changed to playing as a striker, the goals flowed. Goals came easy to him as he scored 115 in five seasons in the Second Division. His move to play up front came in the 1955/56 season.

Over the years Liddell had established himself as Liverpool’s star man. He was the club’s top-scorer four seasons out of eight in the top-flight. But at times he was virtually a one man band. As good as he was, there was only so much one man could do.

He was fiercely loyal as well. Nobody could have blamed him for abandoning ship when after promising seasons that always ended up in mid-table Liverpool were relegated in 1954.

Liddell was fast, powerful, packed a fierce shot with either foot and his headers were like bullets as well. In addition to all that he was as hard as nails.

He was so good he was indispensable to the club. So huge was his influence and importance to the club, Liverpool were quite often referred to as Liddellpool.

All careers must to come to an end. And as good as Billy Liddell was, even his great career came to an end.

He retired 39 years of age when the Bill Shankly revolution was about to start. Shankly did recognise Liddell’s importance though. On occasions Shankly certainly wished that his compatriot had been twenty years younger. Shankly recognised that “Liddell was some player… He had everything,”

He was indeed a great man and he was a god in Liverpool.

On 31 August 1960 Liddell made his last-ever appearance for Liverpool in a 1-0 defeat to Southampton in the Second Division. No other player had made more appearances for the club than Billy Liddell at the time. He played a total of 534 games.

Three weeks later Liddell’s testimonial took place against an International XI which included several greats such as Bert Trautmann (Manchester City), Sir Stanley Matthews (Blackpool), Nat Lofthouse (Bolton) and Sir Thomas Finney (Preston North End’s legend). Liverpool won his testimonial 4-2. Liddell scored for the opposition. His testimonial netted him the princely sum in those days of £6,000. This enabled him to buy a house.

On the eve of his testimonial Liddell again displayed his huge affection for his club and the city. A very proud Scot, he was equally proud of his adopted city and his status within that city. He identified with the people of Liverpool.

Liddell made his amateur international debut against England at Wembley on 18 April 1942, four years before making his official debut for Liverpool! His teammates were among others Bill Shankly and Matt Busby, but it was the young Billy that captured everyone’s imagination.

Liddell also twice represented Great Britain against Europe, in 1947 and then in 1955 when Liverpool were playing in the Second Division. Only Liddell and Sir Stanley Matthews managed to be chosen to play both these games.

In all Billy Liddell played 28 times for Scotland, scoring 8 goals.

You can see a tribute to Billy Liddell – Liddellpool below

If you are looking for that ideal Liverpool FC gift for someone special or for yourself, then why not check out our store HERE.

On This Day 31st July

(2651)
£2.49 (as of August 11, 2022 23:48 GMT +00:00 - More infoProduct prices and availability are accurate as of the date/time indicated and are subject to change. Any price and availability information displayed on [relevant Amazon Site(s), as applicable] at the time of purchase will apply to the purchase of this product.)

(3244)
£6.99 (as of August 11, 2022 23:48 GMT +00:00 - More infoProduct prices and availability are accurate as of the date/time indicated and are subject to change. Any price and availability information displayed on [relevant Amazon Site(s), as applicable] at the time of purchase will apply to the purchase of this product.)

(128)
(as of August 11, 2022 23:48 GMT +00:00 - More infoProduct prices and availability are accurate as of the date/time indicated and are subject to change. Any price and availability information displayed on [relevant Amazon Site(s), as applicable] at the time of purchase will apply to the purchase of this product.)