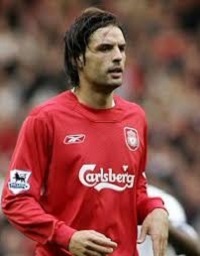 July 5, 2018 July, Liverpool Players Past And Present, On This Day No Comments

Yesterday we posted about Fernando Torres. Today it’s the turn of another Fernando. This time, Fernando Morientes. On this day, 5th July 2006, Fernando Morientes left Liverpool after a less than successful time with the club it has to be said.

Where it all began. Fernando Morientes started to make a name for himself at Albacete in 1993. In his first two seasons he scored five goals in 22 La Liga matches. This impressed the mighty Real Madrid. He continued his progress by enjoying an excellent spell with the Spanish giants.

Morientes became a Real Madrid player in 1997 after scoring 36 goals in two successful years at Real Zaragoza. Whilst at Real Madrid Morientes had the opportunity to showcase his talents in Europe’s biggest club competition. Not many players can say this but Morientes won the Champions League three times. All with Real Madrid. In 1998, 2000 and 2002. He was also a finalist with Monaco in 2004, scoring nine goals in 12 games on the way to the final against Porto. This achievement earned him the title of European Striker of the Year.

Real Madrid certainly regretted loaning Morientes to Monaco. It was the French club who eliminated Real in the quarter-finals in that season. To really rub salt in the wounds, Morientes scored in both legs against his parent club!

Morientes scored a total of 99 goals in 261 games for Real Madrid and won two La Liga titles. Ronaldo’s (the Brazilian Ronaldo) arrival at Madrid was the beginning of the end for Morientes. He was now relegated to fourth-choice striker in 2004/05.

Fernando Morientes’ arrival at Liverpool in January 2005 was hailed as a masterstroke by Rafa Benítez. The signing even impressed Steven Gerrard. Gerrard was excited at prospect of teaming up with the Spaniard. As he said at the time:

“You know you’re not taking a risk. It’s good from a symbolic point of view that we’ve signed someone who’s so renowned as a world-class player. I just hope, after all the success he’s had and trophies he’s won, he’s as hungry to do the same for us.”

Unfortunately Morientes was cup-tied for the rest of Liverpool’s Champions League campaign as he had already played for Madrid in the same competition earlier in the season. As it happened however it didn’t really matter in the end as Liverpool conquered AC Milan in Istanbul without his help.

Soon after he joined Liverpool, Morientes was thrown in at the deep end. He started matches soon after his arrival even though possibly not 100% match fit. Rafa Benitez was desperate that his compatriot would gain match fitness quickly and hit the ground running.

Morientes netted in his fourth game, a 2-1 away win against Charlton. And a cracking goal it was too. Two minutes after John Arne Riise’s equaliser the ball fell to Morientes. Showing his undoubted class, Morientes moved the ball from right to left, opening up the chance to shoot. From just outside the area his left-footed strike arrowed into the top corner.

He was also on the scoresheet in the following game against Fulham with a trademark header. However, slight knocks and European ineligibility restricted his progress and he only added one goal before the end of the season.

Goals Hard To Come By

There was no doubt about Morientes’ class and experience but sadly he never really became a first team regular. He was at best a member of the first-team squad. The Champions League had been a popular tournament for Morientes over the years. So much so he had his brightest moments in the red of Liverpool in Europe’s premier competition.

Two goals against CSKA Moskva on 10 August 2005 opened his account for the season. Following on from this he scored a sensational goal against Anderlecht.

However, in domestic competitions Morientes was anything but prolific. His best ratio in La Liga was a goal every 1.74 games in the 1998/99 season (19 goals in 33 matches) and 1.83 (18 in 33) in 2001/02 for Real Madrid. For Liverpool though Morientes only scored five League goals for Liverpool in 28 matches. A poor return really for someone with so much quality. This was a ratio of a goal every 5.60 matches.

“If you sign a young player people accept he will need time. If you sign a star, people want him to produce immediately,” he said. “Nobody can say Morientes is a bad player. He is really good in the air, good with both feet, makes good movement and is a good finisher. He is a fantastic player. Is he playing at his level? Maybe not.”

Morientes won some silverware before his unavoidable departure when he came on as a 48th minute substitute in the FA Cup Final win against West Ham in 2006.

It was no surprise when Morientes joined Valencia in July 2006 after a very disappointing 16-month spell at Anfield.

Moving back to Spain in July 2006 inspired Morientes to score in every other game in his debut season at Mestalla. This was short lived however. He only scored seven goals in 42 La Liga matches in his other two seasons at Valencia.

At the end of July 2009, at the age of 33 and having taken his career total of club goals past the two hundred mark, Morientes left Valencia on a free transfer. He signed a two-year deal with Marseille.

Morientes won the French league while Didier Deschamps was manager. However he only contributed one goal in 12 league appearances and left the French outfit only 12 months into his contract.

On transfer deadline day, 31 August 2010, Fernando Morientes announced his retirement from the game after failing to find a suitable deal.

He had turned down offers from Sporting Lisbon, and from teams in Mexico, Qatar and Dubai.

The Premiership obviously didn’t suit Morientes and he was glad to leave English football.

“I wanted to return to what I knew and play the kind of football in which I felt more comfortable. I didn’t like the physical nature of the game in England or the referees who let more things go, and who blow for fewer fouls than they do here [in Spain]. A striker isn’t protected from rival defences there, and they gave me a really hard time.”

He wasn’t completely done though. Four ands a half years after announcing his retirement as a player, Morientes at the age of 38, put his boots back on when he joined DAV Santa Ana in the Madrid regional championships.

In total Fernando Morientes scored 12 goals in 61 appearances for Liverpool. (3185)
£6.99 (as of July 6, 2022 04:30 GMT +00:00 - More infoProduct prices and availability are accurate as of the date/time indicated and are subject to change. Any price and availability information displayed on [relevant Amazon Site(s), as applicable] at the time of purchase will apply to the purchase of this product.)

(108)
(as of July 6, 2022 04:30 GMT +00:00 - More infoProduct prices and availability are accurate as of the date/time indicated and are subject to change. Any price and availability information displayed on [relevant Amazon Site(s), as applicable] at the time of purchase will apply to the purchase of this product.)

(1651)
(as of July 6, 2022 04:30 GMT +00:00 - More infoProduct prices and availability are accurate as of the date/time indicated and are subject to change. Any price and availability information displayed on [relevant Amazon Site(s), as applicable] at the time of purchase will apply to the purchase of this product.)