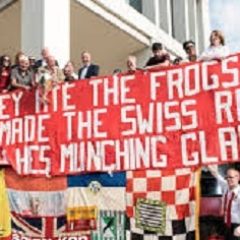 Almost 12,000 fans packed into Wrexham’s Racecourse Ground as Liverpool played Wrexham in European Cup Winner Joey Jones’ testimonial. The game ended 2-2, with Liverpool’s goals coming from Ian Rush and Don Hutchison. Jones signed for Liverpool from Wrexham in July 1975 for £110,000. He rejoined The Robins three years later, then had spells in […]