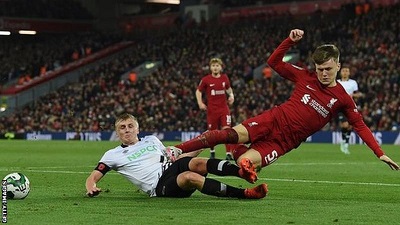 November 14, 2022 November, On This Day, View From The Kop No Comments

How good must that feel hey. At the tender age of 17 and you’re signing your very first Liverpool FC professional contract. What were you all doing on your 17th birthday? Congratulations to Ben Doak on signing his very first Liverpool professional contract. And a belated Happy Birthday greeting as well. Hope you had a great birthday Ben. Any nice pressies? Other than the aforementioned contract of course. We hope it’s the first of many. His birthday was last Friday by the way (11th November).

In time, we may well look back at this day and look at the entry “On This Day 14th November” as a very significant day. Again, hopefully so. Still early days of course but the early signs are that we may well have a player on our hands here.

I was at the game on Saturday just gone against Southampton and I said to the fella next to me that (apart from the obvious, three points in the bag reason), I hoped that we were three or four goals to the good entering into the last 10 minutes or so. Why so? What was the added reason? Simply so that we could have put young Ben Doak on for his Premier League debut.

I couldn’t go to the game against Derby last week in the Carabao Cup, but talking to a pal of mine, Ben didn’t look out of place at all when he came on. In fact, it was said that many of the more senior players were looking to get Ben on the ball as much as they could. Totally unfazed was the verdict.

Many will already know who Ben Doak is, but there may be some who don’t know who he is. Apart from saying shame on you if that is the case, let’s find out a bit more. So, who is Ben Doak?

In short, Ben Doak is another exciting youngster coming through the ranks at Anfield. He arrived at the club from Celtic in March 2022, with Celtic receiving a training compensation fee in the region of £600,000. His stock in trade is being identified as a fast and direct winger. Since his arrival at Anfield, Doak has impressed for Liverpool’s U18s, U19s and U21s in his first season with the club.

He has impressed to such an extent that the Scotland U21 international was rewarded with that first-team debut for the Reds against Derby as mentioned above.

Before he arrived at Anfield though, he was already familiar with baptisms of fire. Just weeks after starting for Celtic’s B academy team in the Lowland League in December last year, Doak went on to impressively come off the bench for the first team in victories over Dundee United and Rangers. Imagine that, 16 years-old and you’re playing in one of the fiercest and hottest football rivalries ever. Playing for Celtic against old foes Rangers. Wow, you must have balls of steel for that!!

A Big Future Ahead?

So, will Ben Doak have a big future ahead of him at Anfield. Again, we hope so. He is continuing to make a big impression here at Anfield. To such an extent that at times he has been described as being ‘unplayable’ after some of his recent displays for Liverpool.

Long may that continue. As we say, a belated Happy Birthday and a big message of congratulations on being awarded your first Liverpool professional contract. 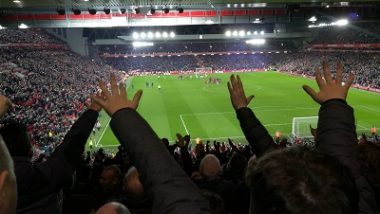 (229)
(as of February 7, 2023 09:09 GMT +00:00 - More infoProduct prices and availability are accurate as of the date/time indicated and are subject to change. Any price and availability information displayed on [relevant Amazon Site(s), as applicable] at the time of purchase will apply to the purchase of this product.) 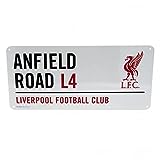 (4362)
£8.36 (as of February 7, 2023 09:09 GMT +00:00 - More infoProduct prices and availability are accurate as of the date/time indicated and are subject to change. Any price and availability information displayed on [relevant Amazon Site(s), as applicable] at the time of purchase will apply to the purchase of this product.)
Liverpool Liverpool Approx 40Cm X 18Cm Show Support For Your Team Makes A Great Gift For Any Football Fan 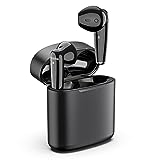 (740)
(as of February 7, 2023 09:09 GMT +00:00 - More infoProduct prices and availability are accurate as of the date/time indicated and are subject to change. Any price and availability information displayed on [relevant Amazon Site(s), as applicable] at the time of purchase will apply to the purchase of this product.)
🟢【Qualcomm QCC3020 Chip and ENC Noise Cancellation】Qualcomm Adaptive ENC enhances comfort and the user experience for true wireless earbuds by dynamically adapting performance. It automatically adjusts according to the level of leak-through, the envi... read more