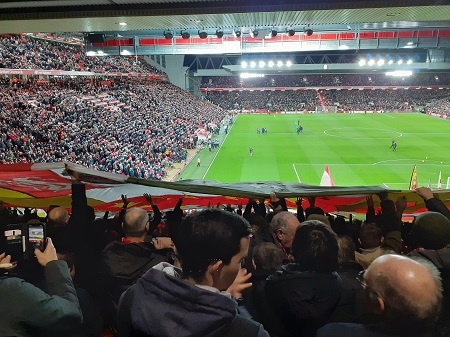 We Liverpool fans easily recognise and identify to this article heading. It is now a very well known Liverpool FC mantra. This Means More. Alongside “Never Give Up” it is now becoming so reminiscent of how the team and the club as a whole are performing. Not only that, it highlights the overall ethos, focus, passion and underlying commitment and ability coursing through the veins of everyone connected to the club.

Add to these two mantras the fabled YNWA and JFT96 and we have a pretty fair indication of the direction and camaraderie steeped into the club.

Let’s always remember though that we fans are part of the “team”. This is so very clear and vitally important to recognise. Yesterday Jurgen Klopp again mentioned the importance of the fans and the role we play. The bond between Klopp and the fans has always been so very strong and it’s amazing to see that the bond seems to be growing ever stronger.

The phrase “This Means More” carries so much more significance when our latest victory is against our old foes, Manchester United. The rivalry between the two clubs has been well documented so many times in so many places. I don’t need to make you aware of it. I’m sure you already know.

But significantly our 2-0 victory yesterday had a more far reaching meaning and carried a more emphatic message. Maybe never before has “This Means More” been so emphatically recognised and celebrated.

Only last week or so some of us were looking ahead to our next two tough games. Spurs away and of course Manchester United at Anfield. Fast forward and we have another six points in the bag and another two potentially difficult games out of the way.

Both games followed a similar pattern in that we should we have been way out of sight before either of our opponents even got a sniff. The fact we didn’t bury these two in an avalanche of goals only served to give them a shot in the arm.

All teams at Premier League level will have moments in a game where they enjoy some territorial dominance and upturn in fortunes. If this happens when you are 3-0 or 4-0 down doesn’t mean that much but when it’s still only 1-0. Hang on a minute, we’re in a game here.

In both of our last two encounters we missed a host of chances to make any subsequent upturn in form shown by our opponents immaterial.

Let me be clear, this is not meant to be any criticism of those that did miss any of the clear cut chances created. As has often be said, the time to worry is when you don’t create chances. And we are creating chances aplenty. So, don’t be surprised if an opponent get a right walloping soon if all the pieces click together.

The fact we won both of these games anyway is the most important thing. Converting the chances our dominance deserves will hopefully soon follow. But maybe that’s being greedy. As long as we are chalking up the wins is what counts more.

So, to the pundits and the media who tried to put another spin on yesterday’s emphatic win along the lines of it was a close affair, or that our opponents deserved something from the game, then they are way off beam.

We will take a 2-0 victory against them all day long. But as far as making out it was a close affair due to the relatively low scoreline and that our second goal came in the 93rd minute is off the mark. There was a huge gulf between the sides.

All said and done it was another vital three points in the bag. But because it was Manchester United to many it was true to assert – This Means More.

And Now You’re Gonna Believe Us

All season a certain chant has been avoided by the fans. After all we don’t want to tempt fate. I remember the 2013/14 season and ‘that’ chant was aired on quite a few occasions. And we all know how that eventually ended.

So, yesterday it was sung with some gusto for the first time this season. The chant? “And now you’re gonna believe us, we’re gonna win the League”

I think that was as much because of whose fans were tucked away in the corner of the Anfield Road stand. Not only because who we played and the rivalry etc but also because another potentially difficult opponent was put to the sword and another important game ticked off the list.

Chanting that seemed to unleash a huge sense of relief in a way to some I’m sure. But still, not yet time to get too carried away. As good as a position we’re in at the moment we haven’t won it yet. That only comes (stating the obvious) when it is mathematically certain. Witnessing the release of so many years of pent up passion and anguish yesterday makes you wonder what the atmosphere will be like if we do actually go on and win it.

Am I being overly cautious? Maybe, but this caution may be justified after seeing us fall short before. This time maybe not so much. But that’s just me.

Where Were You When……

I saw a thread in a forum yesterday after the game headed, “what were you doing last time Liverpool won the league”. A bit presumptuous? Maybe, but in answer to that question, I was actually stood in The Kop. Stood roughly where I am now seated in the all-seater version (although no one actually sits anymore this season). So, from my own point of view, if we do win it, I for one will treasure being there to witness it. Let’s hope we do go and do it. But for now, we haven’t won it so let’s not get too carried away.

This Means More – A Mega Rendition Of YNWA

A great rendition of YNWA yesterday. To see the video I made from my seat in The Kop – have a look HERE.

Thanks for reading folks and if you saw the game yesterday then I hope you enjoyed it as much as I did. It is a great time to be a Liverpool supporter at the moment. Enjoy it while you can.

As a Liverpool supporter and if you want to find out more about our great club that you don’t already know, then have a look over at my main website page HERE.

I earn commissions for any qualifying purchases made from my website. 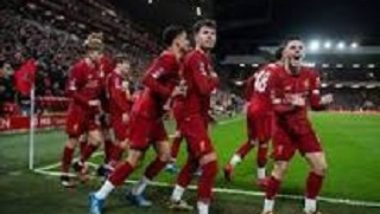 (63)
(as of July 6, 2022 01:56 GMT +00:00 - More infoProduct prices and availability are accurate as of the date/time indicated and are subject to change. Any price and availability information displayed on [relevant Amazon Site(s), as applicable] at the time of purchase will apply to the purchase of this product.)

(157)
£0.99 (as of July 6, 2022 01:56 GMT +00:00 - More infoProduct prices and availability are accurate as of the date/time indicated and are subject to change. Any price and availability information displayed on [relevant Amazon Site(s), as applicable] at the time of purchase will apply to the purchase of this product.)

(151)
£859.00 (as of July 6, 2022 01:56 GMT +00:00 - More infoProduct prices and availability are accurate as of the date/time indicated and are subject to change. Any price and availability information displayed on [relevant Amazon Site(s), as applicable] at the time of purchase will apply to the purchase of this product.)
Care-free Creation– Weighing less than 249 g, Mini 3 Pro doesn't require registration in most countries and regions; The foldable and compact design also makes it easy to carry on any adventure Seriously Pro Shots - Capture your world in remarkable d... read more